Musists find their spiritual sustenance in music. The mystical, emotional, and intellectual experiences derived from music can have a profoundly religious effect on those especially sensitive to its inspirations and complexities. One could say that the entire universe is a throbbing, vibrating and shimmering orchestra of sound, and although we can only hear a narrow band of those vibrations, our sensitivity towards them renders us appreciative of the fundamental physics of the world.

Music is one of the most mystical phenomena in human culture. How is it that the simple interplay of tones can affect us so much? Evolutionary biologists and psychologists are at a loss to explain how our sensitivity to music might have evolved. Some think that it has something to do with our sensitivity to the intonation of language, others a byproduct of our pattern-seeking minds. Regardless of the scientific reason, music has played such a big part in human history that it can easily be seen as a fundamental part of what it is to be human.

Early philosophers believed in a concept called “The Music of the Spheres” – essentially that the mathematics underlying all physics was essentially musical. From Wikipedia:

Musica universalis (literally universal music), also called Music of the spheres or Harmony of the Spheres, is an ancient philosophical concept that regards proportions in the movements of celestial bodies—the Sun, Moon, and planets—as a form of musica (the Medieval Latin term for music). This “music” is not usually thought to be literally audible, but a harmonic, mathematical or religious concept. The idea continued to appeal to thinkers about music until the end of the Renaissance, influencing scholars of many kinds, including humanists.

Culturally speaking, music has helped define (and divide) culture just as much as religion and ethnicity has — you can tell a great deal about a person from the music they love, and maybe even more from the music they hate! Music can be so tightly wrapped up with our identities that we can fail to see the value of alternative varieties. So the dedicated Musist tries to expand their horizons, and thereby expand their own consciousness as well.

There are many ways in which the devout Musist can engage in Musist meditation – either by simply listening carefully to it, or performing it (if they have the ability), but also by discussing music with other Musists, putting together playlists for friends, studying music theory, reading interviews with musicians, participating in the music scene by attending concerts and festivals.

Music is a moral law. It gives soul to the universe, wings to the mind, flight to the imagination, and charm and gaiety to life and to everything.
— Plato

Music is the greatest communication in the world. Even if people don’t understand the language that you’re singing in, they still know good music when they hear it.
— Lou Rawls

Click here to
Get ordained as a Musist Minister
« Previous ministry: Motorism  |  Next ministry: Naturalism » 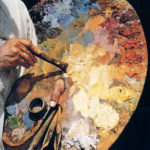